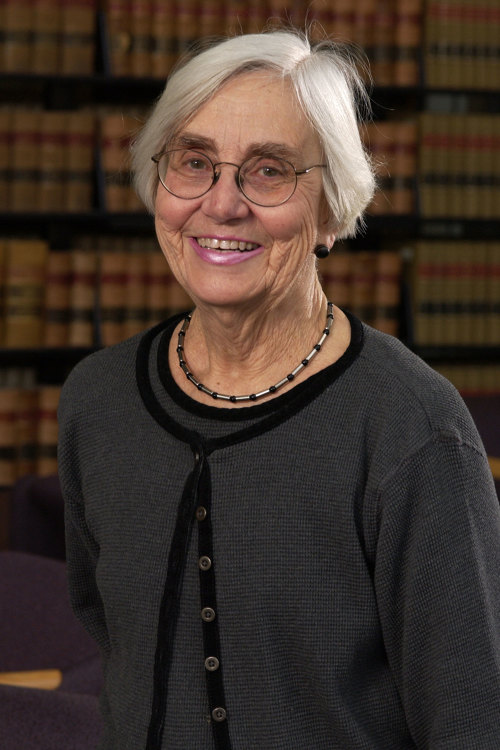 Marygold Shire Melli (Margo) is Voss-Bascom Professor of Law Emerita and an affiliate of The Institute for Research on Poverty. She taught in the areas of family law, juvenile law and criminal law: the areas she calls the people-handling parts of the law. Her specialty was family law which she developed from one two-credit course to two three-credit courses in recognition of the increasing complexity of the area. She also developed courses in Law of the Elderly and Juvenile Justice.

Professor Melli's research interests relate primarily to families and children. She has participated in a large-scale research project that resulted in reform of the Wisconsin child support system and that served as a model for the requirement by the federal government that states adopt Child Support Guidelines. She has researched and written about the role of negotiation in divorce, various aspects of the processing of divorce cases, and developments in the law of child custody. She is a member of the American Law Institute and the International Society of Family Law where she currently serves as a vice-president and as chair of the Scientific Committee, screening papers and planning the program for the ISFL 12th World Conference in 2005.

As a member of the legal profession, she has been involved at several levels in the bar examination process. She has served as vice-chair of the Wisconsin Supreme Court's Board of Lawyer Competence and as Chair of the National Conference of Bar Examiners, the organization which develops the most widely used exams for the admission of lawyers to practice.

Professor Melli counts the significant increase in the number of women in the legal profession as one of the most encouraging developments during her career. When she joined the faculty in 1959, she was the only woman professor on the Law School faculty and there were only a handful of women law students. Today nearly half of the tenure-track faculty and the law students are women.

The Law of Marriage and Divorce in the United States in Levi, Giulio (ed.) Rotondi: Inchieste di Diritto Comparato (1997).

The Economics of Shared Custody: Developing an Equitable Formula for Dual Residence, (with P. Brown) 31 Houston L. Rev, 543 (1994); IRP Reprint Series, No. 712 (Institute for Research on Poverty, Univ. of Wisconsin-Madison).

The Process of Negotiation: An Exploratory Investigation in the Context of No-Fault Divorce (with H. Erlanger and E. Chambliss) 40 Rutgers Law Rev. 1133 (1988); Excerpt reprinted in Brinig, Schneider and Teitelbaum, Family Law In Action: A Reader (1999), in Harris, Teitelbaum and Weisbrod, Family Law (1996) and in Rau, Sherman and Murray, Dispute Resolution and Lawyers (1988).

Constructing a Social Problem: The Post Divorce Plight of Women and Children; Essay Review of the Divorce Revolution by Lenore J. Weitzman, 1986 American Bar Foundation Research Journal 759 (1986). Excerpt reprinted in Harris, Teitelbaum and Weisbrod, Family Law (1996) and in Campbell (ed.) The International Library of Essays in Law and Legal Theory (1992).

The Changing Legal Status of the Single Parent, 35 Family Relations 31 (1986). Excerpt reprinted in Scanzoni and Scanzoni, Men, Women and Change: A Sociology of Marriage and the Family (McGraw-Hill 1987).

Toward a Restructuring of Custody Decisionmaking at Divorce: An Alternative Approach to the Best Interests of the Child in Parenthood in Modern Society (J. Eekelaar and P. Sarcevic, eds.) (1993).

Child Support Awards: A Study of the Exercise of Judicial Discretion (University of Wisconsin-Madison, Institute for Research on Poverty, Discussion Paper 734-83) (1983).

The Legal Status of Women in Wisconsin (Commission on International Women's Year 1977).