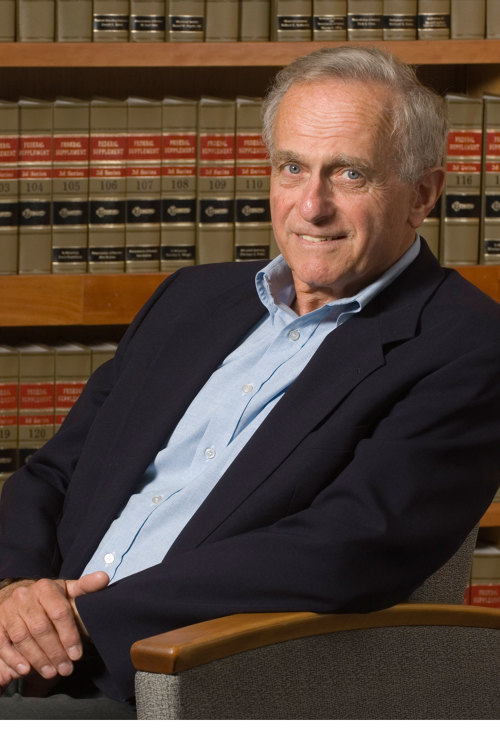 Prior to joining the University of Wisconsin Law Faculty in 1970, Frank Tuerkheimer served as a law clerk to the Honorable Edward Weinfeld, United States District Judge for the Southern District of New York; Legal Assistant to the Attorney General of Swaziland; and an Assistant U.S. Attorney in the Southern District of New York. His prosecutions against process servers for failure to serve complaints as alleged in affidavits of service were the first cases brought under the Civil Rights Act for deprivations of property without due process of law.

As a member of the UW Law Faculty, Frank Tuerkheimer has been active in the three areas of faculty responsibility: teaching, service and research, as per the Wisconsin tradition. His teaching of Evidence stresses the importance of listening to evidence and the use of judgment, as well as knowledge of the rules. His course on criminal practice crosses the line between substance and procedure, focusing on what prosecutors and defense lawyers do and why they do it. He has also taught trial and appellate practice. The record developed in the trial practice class is the basis of the appellate course. This merger of the two classes lends a realistic touch to appellate practice that constitutes a first in legal education. More recently, he has taught a course on Trials of the Holocaust, focusing on defendants in the Nuremberg trials and the Eichmann and Frankfurt Auschwitz trials.

As to service beyond service to the Law School and University community, Frank Tuerkheimer has worked on the Watergate Prosecution staff where he was in charge of the investigation into illegal dairy industry contributions and was chief trial counsel in the case against former Secretary of the Treasury John Connally. He has served as U. S. Attorney for the Western District of Wisconsin, where, among other things, he initiated a model Clean Water Act enforcement program. He has represented the Sierra Club and Natural Resources Defense Council, the Wisconsin Board of Attorneys in disciplinary cases against attorneys, the Wisconsin Judicial Commission in misconduct cases against judges, served as the United States Senate appointee to the National Commission on Judicial Discipline and Removal, acted as a special prosecutor in place of various district attorneys, and for 15 years, represented indigent defendants in federal criminal cases. He has also, since 1997, represented a defendant on Alabama's death row. Law students assist in this representation.

As to research, Frank Tuerkheimer has co-authored a book "Forgotten Trials of the Holocaust in which he and his co-author have written about ten Holocaust trials below the general public's radar. In the same vein, he has conducted an extensive video interview of the senior prosecutor in the Eichmann case - accessible on the internet (see below). He has also written numerous articles on evidence and litigation and has written briefs in a large number of trial and appellate cases. In 1996 he wrote an electronic evidence book, which contains a textual explanation of the rules of evidence, the rules, selected cases, and the complete transcript of a trial. Through electronic linkage, a click on the designated part of the text brings to the screen that portion of the trial transcript illustrating the point of the text. This book is a first in legal education.

Frank Tuerkheimer is a member of the advisory board to EPIC, the Electronic Privacy Information Center and has testified before Congress on proposed legislation affecting the Internet. He is a frequent consultant to USA Today on current legal issues. Since 1985 he has been of counsel to the Madison law firm of LaFollette & Sinykin, now Godfrey and Kahn, where, in addition to representing private clients, he has pursued much of the pro bono representation described above. Leisure pursuits include reading in the sciences, biking, sailing, and travel. Frank Tuerkheimer is married to Barbara Wolfson Tuerkheimer, formerly an Assistant Attorney General in the Wisconsin Department of Justice in its Consumer Protection Unit. Frank and Barbara Tuerkheimer have two children: Deborah who is a Professor of Law at the Northwestern Pritzker School of Law in Chicago and Alan who is the principal of Trial Methods, a trial consulting firm, also in Chicago.